The ferry crossing from tiny Claonaig on the east coast of the Kintyre Peninsula to Lochranza on the Isle of Arran takes just 30 minutes, so that it is possible to visit Arran on a day trip from Kintyre, as we did a few years ago. That said, there is plenty on the island to warrant a longer stay. Arran has a different feel to it from most other Scottish islands, mainly because it is protected from the full fury of the ocean by its location, nestling in the Firth of Clyde and with the Kintyre Peninsula to the west, Rothsay and Bute to the north, and the coast of Strathclyde to the east. Arran is sometimes referred to as "Scotland in Miniature", having its own store of granite peaks, wooded glens, waterfalls, wide beaches, ancient sites and more. As its name suggests, Lochranza is situated on a loch - Loch Ranza. The shoreline is dominated by Lochranza Castle, originally built by the MacSweens in the 13th century, although the present structure dates from the 16th century. There is an abundance of wildlife in the area, most notably the red deer, which sometimes stray on to the golf course, but also the more elusive sea creatures such as seals and otters, while golden eagles have been spotted overhead. The village is home to a Field Studies Centre as well as a Visitor Centre for the Isle Of Arran Distillery. 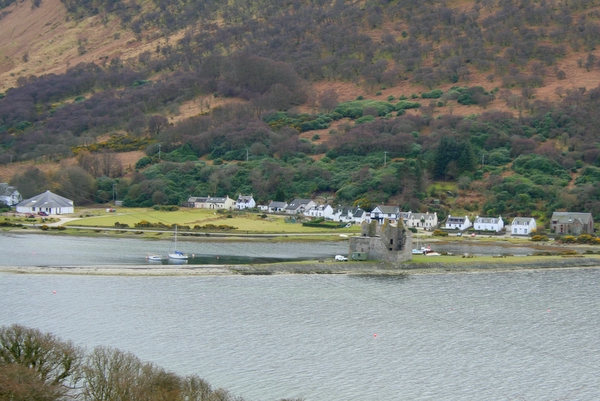